The advent of digital photography saw a seismic shift in the way that we take and consume photography. The days of dropping off your holiday snaps at the developers are long past. In fact, there is a whole generation of people whose faces would turn blank if you mentioned 34mm film to them. The majority of us now take photographs digitally and store them digitally. While we may print off a selection of photographs we’re likely to have thousands more stored up on our hard drive that never make it into print.
But with the exponential growth of technology there’s no way that digital photography is going to stop here. The next five, ten and twenty years could see more dramatic changes. This is just the beginning. Let’s take a peek into what the future could hold for digital imaging.

At the Nividia GPU Technology conference last year, Adobe went into quite a bit of detail about its new plenoptic lens. The word plenoptic comes from the latin “plenus” meaning full, and optic – relating to the eye. Taken literally plenoptic indicates light travelling in every direction in space. It’s an apt name for a piece of technology that captures hundreds of pictures at the same time. A Plenoptic lens is comprised of hundreds of tiny lenses that each take the photograph from a different perspective. While the technology has been around for a while Adobe’s venture is one of the first steps towards producing a commercial product.
This new lens will solve a problem that is beyond even the best Photo editing suites – focus. You can always correct your exposure, your color balance, and tweak to your heart’s content, but if your photograph is out of focus there is very little that you can do to correct it.
With all of the hundreds of images that a plentopic lens records, it’s possible to easily correct any problems with focus, and even to determine where the image should be focused. Once you transfer the data on to your computer you can use software to do some fancy calculations which focuses the image wherever you want.Check out this video demonstration – it is very cool!

Image Credit
The latest iPhone already takes advantage of HDR imaging but it’s likely that in the near future we’ll see this becoming standard in more and more cameras. HDR stands for “High Dynamic Range.” It is a process in photography that involves taking an image at a number of different exposures to create a consistent image in the whole frame. This is particularly helpful when taking an image which has a very light background and a darker foreground, or vice versa. HDR lets you combine the two images to form one in which both the background and foreground are correctly exposed.
Up until now this has been largely a post-processing technique – the photographer makes a composite of the images in their dry darkroom using a program such as Adobe Photoshop. The iPhone 4, for example, takes three or more images which can then be combined. However, it’s looking like it has become possible to do this in a single frame. There are rumors that Olympus is working on a single shot HDR camera. This would be a massive step forward in digital imaging and one that will get lots of digital photography aficionados very excited.
Where did The Mirrors Go?

Recently we’ve seen the launch of a number of mirrorless cameras. These cameras dispense with the pentaprism and mirror, instead having a large sensor – the same size as a traditional DSLR. There are a number of major benefits to mirrorless cameras – for one thing, in dispensing with the mirror the camera can be much smaller and lighter. Micro cameras can be slipped into a pocket while retaining the image quality of a DSLR. Although many mirrorless cameras are currently more expensive than standard DSLRs, there is the potential for these cameras to be much cheaper. Without the light box the lens can be placed much closer to the sensor, meaning lighter and cheaper lenses with the same quality of image. The pay-off, and sticking point for many photography professionals, is that a mirrorless camera comes without the optical view finder that many photographers are wedded to.
However, it does appear to be the way that things are going – smaller cameras with higher quality images can only be a good thing for many people. And it seems like the big photographic companies think so too, with Sony and Nikon looking set to announce their own mirrorless cameras in April of 2011.
Digital Storage

Do You Print Your Photographs?Many people have good intentions about printing them off and putting together a nice photograph album but few actually get round to it – this is despite the fact that there are many online services where you can upload your images and have them printed reasonably cheaply. With more and more people carrying handheld devices it’s likely that the necessity for having hard copies of our snaps is going to diminish.
Photographs can be stored at low resolution (thus taking up less space) and easily shared among friends using platforms such as Flickr and Facebook. The way that we consume photography has changed. People take hundreds of photographs and within minutes they are shared on Facebook. There is no longer any wait between taking the image and consuming it. In our culture of instant consumption the days between ordering prints from an online service and receiving them often seem like far too long.
What handheld devices, such as the iPhone, iPad and Xoom, mean is that people are no longer restricted to looking at their photographs on their computer (or transferring them into a digital frame). Photographs can be brought anywhere and stored on devices that you keep in your pocket anyway. Why do you need to print photographs when you have them everywhere you go anyway? Future generations (you know, the ones who can’t remember a time before the internet) will boggle at the idea that photographs are physical objects and were ever things that had a life outside a computer. 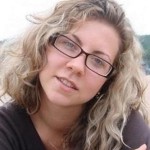 Maria Nemenman is a contributing writer for Designbeep, and a marketing specialist at Wix.com. Wix is a free website builder that lets users create and customize Flash websites with drag & drop - no coding is required.