They say, “don’t judge a book by its cover”. While this may be good advice as a metaphor, the truth is, when it comes to actual books, we do judge them by their covers. The cover is the first thing we see on the shelf and one of the main things that draw in and makes us pick up the book. A great cover is also one of the few things that make people buy a hard copy of a book these days. In the sci-fi genre, many elements can go into creating a great cover and a lot of rich material within the book to draw from. Here is how to design an excellent sci-fi book cover.

The one thing that pretty much every book cover has in common is words and font. Most great book covers will have the title of the book and the author’s name on the front. This is a great opportunity to convey more about the vibe of your book to the reader.

Since sci-fi books are not about standard, boring subjects, the cover should not use a standard, boring font. These fonts can be futuristic or ancient-looking depending on where the book is set. If it is in an alternate reality, the font can be an augmented vision of something familiar.

Frank Herbert’s Dune, Red Planet by Robert A. Heinlein, and Dahlgren by Samuel R. Delaney are all great examples of how using a unique and interesting font draws the eye. Dune was also part of the Penguin’s Galaxy sci-fi miniseries in 2016 that updated classic sci-fi book covers using just minimalist font created by artist Alex Trochut. Great article here on the most popular design fonts for books.

Give an Idea of Scale

Science fiction as a subject matter is many times about how small humans are as they explore the larger world, universe, or galaxies around them. Playing with this concept on the cover of a sci-fi book is a classic practice that creates interesting feelings and questions for readers before they even open the book.

Loss of Signal by S.B Divya shows how small a space ship is flying past a planet. A small figure walks through giant, futuristic structures on the cover of Ray Bradbury’s The Silver Locusts. And, a tiny looking astronaut walks through the expanse of a strange planet on the cover of Enceladus by Brandon Q. Morris. All these covers play with scale to show just how small we are in the world of the novel.

Sci-fi books are packed full of amazing and fantastical characters. This is one of the major things that people love about sci-fi. If you have or can create a killer image of the coolest, weirdest, most interesting, or most disturbing character in the book, readers will have no choice but to crack the book open to find out more. 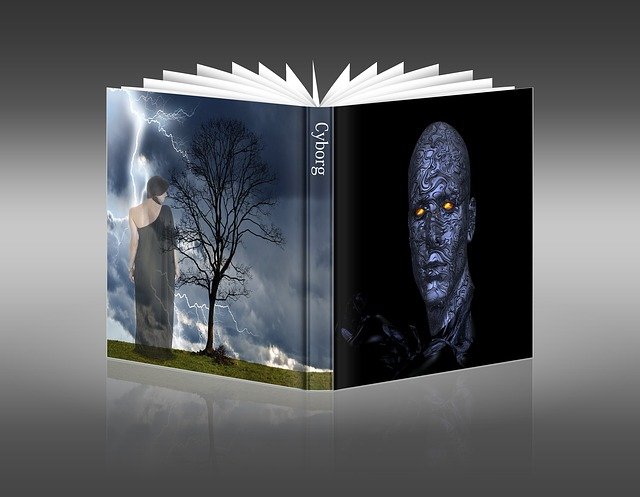 Some books that have used this concept to perfection include the creepy, one-armed android on the cover of Philip K. Dick’s Do Androids Dream of Sheep? There is also a great alien/ robot creature on the cover of Frederik Pohl’s Man Plus. Joe Haldeman’s The Forever War features a very compelling, lone, futuristic soldier on the cover as well.

This can be a difficult task though. The image of the character has to be very compelling. If not, the book may be passed over and deemed silly or generic. The exception to this is that there is a subgenre of sci-fi that is meant to be pulpier and more “B-movie” style. For these types of throwback sci-fi books, a somewhat campy image of the character is ok, like the cover of John Steakley’s Armor.

While the section above was dedicated to showing the monster, sometimes it is more effective to keep it vague and mysterious. This is one of the biggest elements of sci-fi, the mystery and unknowingness of it all. For that reason, many sci-fi authors want to keep this mystery and communicate it on the cover.

Some great covers utilize this premise. The classic sci-fi tome, The War of the World by H.G. Wells, shows two shadowy aliens walking through a post-apocalyptic world. Swarm, by Guy Garcia, shows the outline of a humanistic figure emerging from the fog. Arthur C. Clarke’s Rendezvous with Rama takes it to the next level as you get what turns out to be a close up of an alien space ship and a title where the words are fuzzy. This suggests the book is too mysterious to even see the title clearly.

Mystery Island by Jules Verne flips the convention on its head and instead of seeing a fuzzy version of the monster, you get the scene from the monster’s perspective. The cover shows a group of people searching for something and the shocked look on the main figure’s face as he finds it.

Spaceships, planets, cities in ruins, and close-ups of eyes or other body parts are all iconic images that sci-fi books have used throughout the years to convey their theme. Space exploration, foreign planets, dystopian universes, and post-apocalyptic worlds can all be communicated to potential reads with these images. They really set the scene for the sci-fi book before the reader even reads a word.

The watchful and wondrous eyes on the covers of George Orwell’s 1984 and babel-17 by Samuel R. Delany show different things; a dystopian Big Brother and the wonders of space. There are iconic spaceships in the covers of books like The Sands of Mars by Arthur C. Clarke and on multiple Isaac Asimov books. You will find the Statue of Liberty and the Chrysler building underwater on the front of John Bowen’s After the Rain and J.G Ballard’s The Drowned World respectively.

Are you interested in seeing the best-selling sci-fi books – and their book designs? Check out this article I came across from CoolThingsChicago.