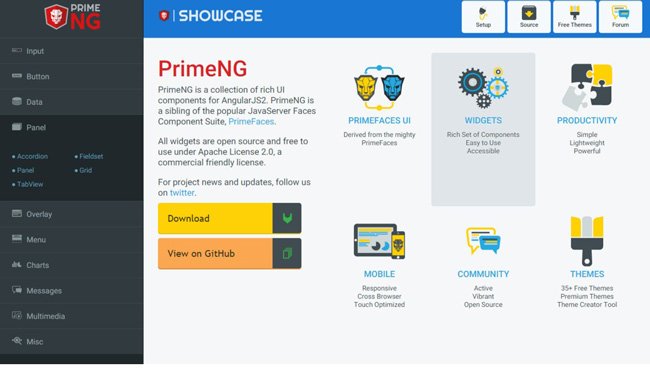 PrimeNG is a collection of rich UI components for AngularJS2. PrimeNG is a sibling of the popular JavaServer Faces Component Suite, PrimeFaces.
PrimeNG setup consists of three steps; download, load and import.

In an Angular2 application, you don’t need to use jQuery directly however some of the PrimeNG components are based on existing jQuery plugins in PrimeUI and others are native components. jQuery based ones are optimized for PrimeNG integration using a technique called enhanced mode where plugin assumes dom is already created by PrimeNG component. As a result, jQuery plugin does not manipulate dom, only adds lightweight behaviors and low level requirements such as positioning.
All widgets are open source and free to use under Apache License 2.0, a commercial friendly license.