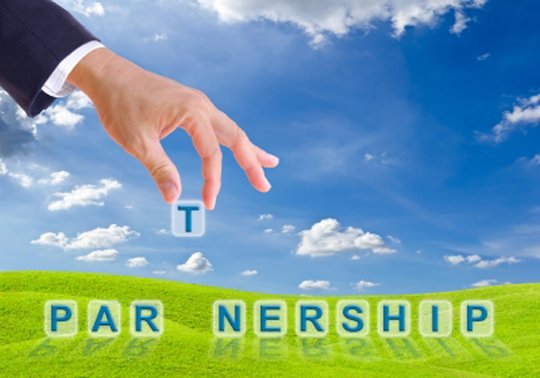 Co-working agreements, partnering up and outsourcing to other freelancers while charging more so you can take a cut of their action are all different ways of partnering up.

Sometimes they all amount to the same thing – working with other freelancers – and at other times they are more of an actual partnership. Other than setting up a full legal operation as some kind of partnership in your jurisdiction, the line between freelancer and partner can get awful blurred. In some ways it doesn’t really matter so much what you call it, but it can matter more what it looks like to the outside world.

Benefits of a Partnerships

If you’re a programmer, do you know every coding language to the same high level? Or would you benefit from some kind of agreement with another coder? Are you a graphic designer who can only stretch to Javascript and cannot really program worth a lick? Partnering up with a true programmer would certainly help offer a more rounded web design service rather than trying to wear more hats or trying to be something you’re not.

Freelancing can be a lonely thing working alone on a PC or Mac all day with no one to talk to. Sure, there are web forums to discuss your latest clients from hell experiences, but it’s just not the same. Having someone who’s more of a partner with a vested interest in your success matters greatly for people who prefer not to operate alone or have more dependent personalities.

You can accept more projects if you are a web design team. The “team” part may actually be a series of freelancers all working independently other than an agreement to work together towards a common goal. Or it can be a team in a physical office. Entirely up to you.

Freelancing May Not Be Good For You

I have a friend who couldn’t hack it as an independent web developer. He was going stir crazy working on his PC at home. Even when he started to become a digital nomad travelling the world, he still couldn’t deal with the isolation (being away from home you’ll always be the outsider). Eventually he quit being a freelancer and took a networking job. He said he wanted to be in an office around people, despite the fact that he had a falling out with the last team he worked with.

Freelancing may not work for people who like to graze either. Working alone at an office may get very lonely. Someone people can have a tendency to snack, overeat and pile on the weight. Working as a partnership can help to elevate the boredom and loneliness. It can give you one or more people to communicate with where you genuinely care about achieving collective goals which can give you greater focus.

You may not be a people person. To be a freelancer in many ways means to be a jack of all trades. You need to be good with people, a strong communicator, a good negotiator, a good mediator when clients are upset, highly knowledgeable and able to deliver the service offered. It is an awful lot to expect of one person, especially delivered in normal working hours over the course of 5+ day working week.

You may crave stability or require it because of your personal life situation. In which case, the variability and lack of predictability of freelancing may not be for you. Lack of paid time off may make it difficult to take care of the kids when needed without seeing a substantial drop off in earnings. Loud kids at home may make it difficult to work from a home office too.

Some of the partnering choices include paying for an office for everyone to work from and some joint equipment to share the use of (phones, printer, fax, etc.). This is the old fashioned business model from a decade ago. And an expensive one.

For many freelancers, the lower cost of working from home was one of the initial attractions. An office with a partner may seem like going backwards with less independence, more accountability to someone else, and back to a cubicle once again.

An office-based approach also means that you can only take on partners who live locally to you. If you would like to travel or have a choice where you wish to locate yourself within your own country, then a fixed location office makes no sense even if a partnership approach does.

Partnering with other freelancers from around the world is another option. You can elect to work with people who are the same nationality as you to avoid cultural and language differences or you can partner with anyone who seems the best choice and deal with the aforementioned issues later.

With partnering with people from around the world, the “partnership” can be one of a loose verbal agreement. If you do not have a solid basis of knowing the people in person – or having never met them in their home country – then “partnerships” can disintegrate at the first argument that erupts because there is very little emotionally that holds you together.

Indeed, people who outsource tasks to the Philippines find that actually flying over there to meet the people they are working with makes a big difference to the working relationship and the quality and timing of the deliverables once back on home soil.

Money can get messy when dealing with partners (official or unofficial) or just outsourcing to other freelancers in a psuedo-partnership arrangement where you refer different types of projects (or parts of them) between a small working group.

With full partnerships, you’ll most likely have a legal structure and a single bank account. However, for everyone else, you’ll likely have separate bank accounts in your own name or business brand.

What is easier for many is to share the use of a single PayPal account or to have payments going into a single account (in the case of non-partnerships) and spit payments out to other PayPal accounts for each worker.

A decision will need to be made for whether individual remuneration should be linked to hours worked or the task because sometimes one freelancer assignment will take longer than anticipated and that freelancer may expect a greater cut of the client sum paid as compensation.

This sort of issue can really throw a spanner in the works, so a firm decision on this needs to be agreed upon before starting any kind of even loose agreement to share business.

Whether partnering up as a freelance or becoming part of a partnership team, it’s very much a personal decision.

Some freelancers will have partly become independent because they like it that way.

Others will enjoy their independence but find value in sharing resources and clients where appropriate.

Still others will prefer a simple referral or outsourcing model where they take a slice off the top for any business transferred over, with no more expectations than that.

Make sure you make the decision for your own reasons and don’t let yourself be persuaded by other freelancers who want the deal. Ultimately, you may find that you regret it so tread carefully.