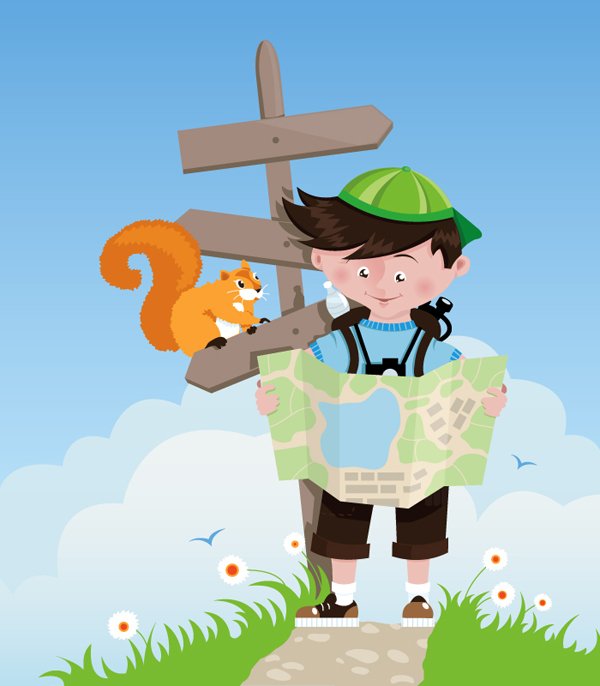 In the last few years cartoon characters and mascots became very popular and you can see them everywhere.Creating these kind of characters is not hard but of course it not easy.As being a beginner in illustration i learnt a lot from the below tutorials.You can also create amazing characters and mascots especially for websites.(I do.)Adobe Illustrator is one the best application for creating vectoral graphics and today i’ve collected best tutorials which you can learn very detailed techniques and basic skills from beginners to advanced users.

1.How to Create a Vector Illustration and Prepare it for Micro-Stock Sale
This tutorial details a professional workflow for creating vector illustrations and prepping the artwork for these sites.

5.How to Create a Curious Owl in Illustrator CS4
A perfect tutorial for creating vector character.The tutorial is not for beginners but easy to follow steps.

6.Design a Character called a Minion from the film Despicable Me
An interesting but good tutorial with a perfect final result.

7.Create a Dirty Water Drop Character
The character is created for spreading the awareness about The Water Crisis.This tutorial is for advanced users.

9.Create a Funny Singing Pig
In this tutorial you can learn to create a funny singing pig with a simple bow tie and some musical notes.

10.How to Create a Cartoon Character with Expressive Lines
Cover the necessary steps for creating a colored multicolor cartoon character that includes shadings using Adobe CS3, a Wacom tablet, an inked drawing, and scanner.

11.How to Illustrate a Cute Emo Kid
As you see,you can create a great emo character using Illustrator CS3, pen, paper, scanner, and Wacom tablet.

13.Create a Cute Monster Girl in Illustrator
In this tutorial you will learn how to create a cute little monster girl and in the same time, you will learn to handle multiple layers and maximize their efficiency.

16.How to Create a Cool Monkey Character in Illustrator
Create a monkey character illustration using Adobe Illustrator. You’ll be using basic Shape Tools, the Pen Tool and various other Illustrator techniques to create the illustration.

17.Create a Valentines Day Illustration for Your Sweetie
Learn to create a cheerful character and lovely, colorful bubbles.There are sone good techniques used in this tutorial.

18.How To Draw Ferb Step By Step
It is a basic illustrator tutorial for beginners.All the steps are well described.

19.How To Create A Very Scary But Cute Monster In Illustrator
This is a tutorial on how to draw a complex monster illustration

21.Creating Bart Simpson Vector Character in Illustrator
This is a short beginner tutorial. You will use Layers, utilize the Pen Tool and its sister tools, such as the Convert Anchor Point Tool, and Direct Selection Tool, to draw and colorize a vector Bart Simpson in Adobe Illustrator

23.Create a Cute Baby Seal with Illustrator
A simple tutorial to teach you how to create a super cute baby seal

24.Illustrator Mascot Design Tutorial
In this tutorial you will learn how to correctly apply proper drawing principles and state of the art Adobe illustrator on demand techniques to make your mascot design really pop up from the cold paper sheet

26.How To Create Your Own Vector Cartoon Character
Create your own vector character using basic techniques

27.How to Create a Stinking Zombie Flesh-Eater in Illustrator
A colorful illustrator tutorial for advanced users.

28.How to Create a Cute Bunny Vector Character
This tutorial uses simple shapes and gradients that are easy to apply to other character illustrations. The great thing about his tutorial is you don’t have to be an amazing artist to create it

31.How to Create a Web Site Mascot
This character was originally made for an Envato site which didn’t take off, and the artwork wasn’t being used

32.Create a Fun, 3D, Character Logo
Use illustrators 3D tool to create text with depth and give a sticker effect

33.Create a Cute Retro-Flavored Teddy Bear with the Gradient Mesh Tool
In this tutorial, you’ll learn how you can easily add a retro feeling to your creations.

34.How to Design a Cheeky Koala Mascot Head
This tutorial will show you how to combine basic shapes with some clever coloring and blending to make a fantastic looking koala character.

35.Create a Happy Sun Character
This intermediate tutorial is great for logos, children illustrations, and other projects relating to climate change

37.Create a Gang of Vector Ninjas
Create a group of cool vector ninja characters using just the basic shapes and a variety of simple tools, making it a good start for Illustrator beginners

38.Create a Cool Vector Panda Character in Illustrator
Step by step walkthrough of the process used to create a cool Panda character, from the basic outlines through to the detailed final design.

40.How To Draw a Cute Vector Dog Character in Illustrator
Chris teaches how to draw a vector dog character in illustrator by adding various lines, colour fills gradients and highlights to produce a cute cartoon representation

41.Create a Simple Mechanic Character in Illustrator
The character is made up of basic rounded shapes, which gives that cool stylized style while keeping the character cute and friendly

42.Create a Green Slimey Monster
Another monster character from Chris Spooner with basic tips and tools.

43.Create an Angry Orange Monster
Easy enough to follow by Illustrator beginners, with mostly the basic tools and shapes being used

46.How to Turn a Sketch into a Fat Cat Vector Illustration
This tutorial aims to guide you from sketchbook to screen; a “Fat Cat” doodled with biro translated into a neat vector caricature. Intermediate knowledge of Adobe Illustrator is advised

47.How to Create a Killer Chainsaw Bunny Character
Another good tutorial with dynamic background.It takes some knowledge and skill with the Pen tool

48.Create a Super Happy Octopus Character
A perfect tutorial to create a character.I learnt a few more techniques in this tutorial

49.Creating a Colored Shape for Your Line Drawing Without Retracing It
Create a fill color for a line drawing in Adobe Illustrator. This is a method to avoid retracing around your line drawing

51.How to Create a Fantasy Character in Illustrator
This tutorial covers the process of creating a fantasy pinup illustration with Illustrator CS3 using Live Paint, so you will need CS2 or above to follow.

52.Create A Vector Art Twitter Bird Character Icon In Adobe Illustrator
This tutorial also assumes you have a working knowledge of Adobe Illustrator, the basics of creating vector paths using the pen tool, and the basic vector art tools.

54.How to Draw a Cartoon Duck , Character Illustration
This tutorial will take you through basic shapes , using basic tools ie pathfinder , knife and eyedropper tools to create a cute duck character.

55.Twitterlove Bird, from Sketch to Vector in Photoshop and Illustrator
Tutorial for creating a twitter bird using both photoshop and adobe illustrator.

56.How to Add Fur to Vector Animal Illustrations
This tutorial is geared towards intermediate to advanced Adobe CS3 Illustrator users.

62.Create a Vector Pirate Cartoon Character from a Hand Drawn Sketch
Another great tutoriak from Chris Spooner.By firstly using the power of pen and paper a character design is created, which is then scanned into the computer to use as a base for tracing with Adobe Illustrator.

63.Creating Vector Characters in Illustrator
The character we created is intended to be a mascot of sorts, and aimed at all ages. It is usable at a variety of sizes, and in both print and animation

65.Create a Cute Furry Vector Monster in Illustrator
The tutorial is from Chris Spooner.Follow these steps in Adobe Illustrator to create your very own super cute fuzzy monster character.